Ascalu Kidane is a 45-year old mother of five children and the head of her household. She lives in Kermed, a small village in Anseba. Like other people in her village, Ascalu depends on agriculture for her livelihood, growing sorghum, pearl millet and maize on her half-hectare plot. To support farmers like Ascalu, who were struggling to produce enough crops to sell and feed their families, Vita began an improved pearl millet programme, in which small farmers could benefit from disease-free seed and climate-smart agriculture training. 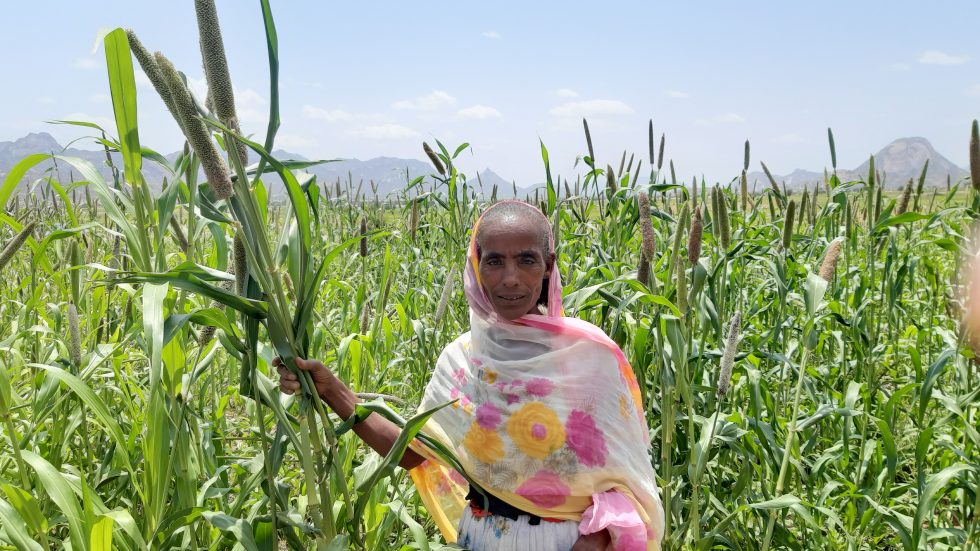 At the start of the project, all the farmers from Ascalu’s village participated in a meeting where they learned about an improved variety of pearl millet called Kona. This variety matures early, meaning farmers can harvest their crops earlier than usual and before drought hits. It is also resistant to disease and more productive than local varieties of pearl millet.

After the farmers’ meeting, interested farmers were given improved, disease-free pearl millet seed to plant. Ascalu, however, was reluctant. It was only on seeing first-hand the success of her neighbouring farmers and the stark difference between the local variety of pearl millet and the improved variety that she decided to get involved.

“I saw the performance of the new variety and I was able to compare with our local variety. I noted that the improved Kona variety has much higher yields. My neighbours got a three to four-fold increase in their yield. Besides, Kona was early maturing, resistant to drought and disease, and produced much more food.”

Convinced of the potential of this climate-resilient crop, Ascalu joined Vita’s farmers’ group and planted her first yield on her small plot in 2019.

“I planted on my plot of around 0.5 hectares. I got a remarkable yield of about half a tonne from my small plot!”

Her harvest was bountiful and for the first time in years, gave her enough surplus to store in her house. This has enabled Ascalu to start planning for her next planting season and she is already hoping to plant more than two hectares of land and even take a lease from her neighbours.

The result of this improved seed multiplication project for Ascalu and many farmers like her, as well as their local communities, is guaranteed food and nutrition security. Through Vita’s initiatives, 2019 saw a large increase in the supply of clean seed for staple crops such as wheat, pearl millet and potatoes in three regions of Eritrea. Access and successful growing and harvesting of this seed helps to prevent malnutrition, hunger and poverty, building the resilience of small farmers and communities at regional and national levels.

To support climate-resilient projects like this that provide a secure source of food, life-transforming agriculture training, and resources to help farmers adapt to climate change, you can make a donation here