Mitselal Tesfassilasie, 46, is a mother of ten children (four boys and six girls) who lives in a village of Eden, which is about an hour north of Eritrea’s capital, Asmara. She is divorced and raises her children by herself.

Mitselal has been using an improved cook stove for six years now. It is called an Adhanet – which means Saviour in the local language, Tigrinya.  She notes that the improved stove has a lot of advantages over the traditional open fire stoves. With the traditional cook stove, she and her two daughters used to walk two to three hours, three times a week to fetch 40 kg of wood and at times would have had to buy the wood instead. The traditional open fire stove consumed a lot of firewood put a lot of pressure on the women.

With the improved stove she only collects twigs and dry leaves once a week from close farms. Saving her and her daughters time and from carrying heavy logs.

Mitselal says the improved cook stoves saves trees, has no smoke emission, is easier to use and healthier for her family. It is also very efficient and the design is very attractive. She added that the house is clean from soot which is much better for breathing and also for cleaning.  The absence of smoke from her kitchen allows her to wear clean clothes while baking injera and making sauces, something she takes pride in doing.

Before the introduction of the Vita improved cook stoves programme, Mitselal says she and her family used to suffer from respiratory and eye diseases. She used to visit the clinics very often. But the chimney in the stove now takes the smoke out of the kitchen. It also cooks food much faster than traditional stoves because the flame is enclosed, capturing most of the heat energy. In fact, the improved cookstove is at least 60% more efficient than the traditional stoves.

She now has ample time to do other chores- like keeping poultry and hair dressing which generates income for the family. She has around 40 chickens and three goats.  She has time to take care of herself and her children and spends time relaxing with them having coffee. Mitselal further adds that her children’s school attendances, particularly the girls, has improved as they no longer have to fetch so much wood.

She is very thankful for the project. Mitselal said that the improved cook stoves and training on dietary that she received has really helped her to prepare nutritious meals for her family.

She said, ‘The Adhanet is a valuable asset that every woman needs to own’. She also added that it has made life easier for all the women in the villages. 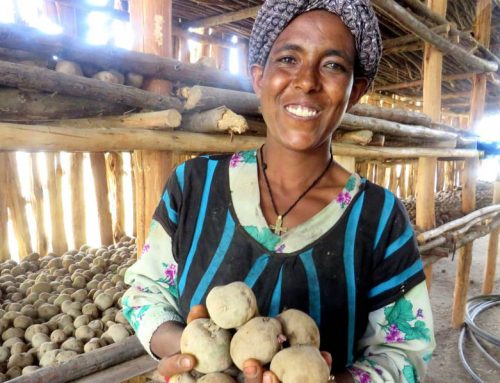 Potato seeds and their power to transform lives 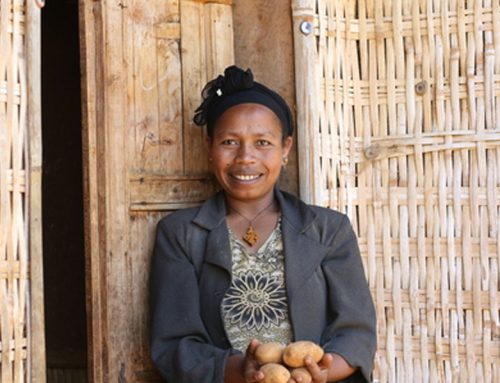 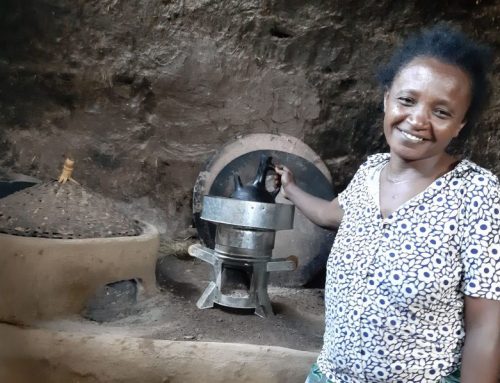