Tozene Nada was born in the mountains of the Great Rift Valley in southern Ethiopia. Despite the steep and hilly countryside and its characteristic high altitudes, Tozene’s homeland was abundant and fertile. However, the strains of having to support, feed, and nourish an ever-growing population began to take its toll on this once bountiful land, resulting in overworked soil and smaller yields for farmers like Tozene. With the passing of her father-in-law and her husband forced to migrate to Ethiopia’s capital, Addis Ababa, to support their family, Tozene took over the running of the two–hectare family farm, alone. 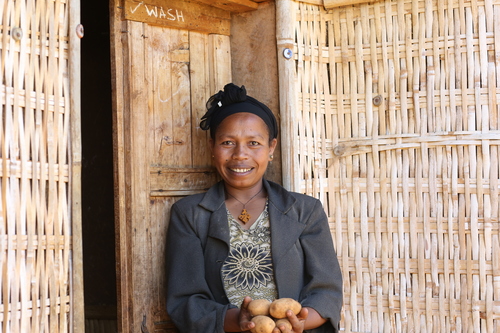 Managing a farm – as well as a growing family – without the support of her husband was difficult for Tozene but not uncommon in Africa, where men are frequently forced to seek employment in urban areas to supplement the income of very small farms. Unfortunately, this results in a further strain on the time, energy, and responsibilities of the women left behind as they are expected to manage farms, run households, care for extended family, and rear children alone. At age 38, Tozene had been the head of her household for over 15 years and was the proud mother of three children – one boy and two girls. While this presented more than enough challenges for Tozene and women like her to overcome, the worsening environmental conditions and aridity of the overworked land added a significant threat to her family’s survival in Doko Yoyery. Only new and innovative land management practices could provide Tozene and other rural farm families with the tools to continue to live on the land she was born on.

The humble spud – our favourite of all foods in Ireland – offers a viable and sustainable solution to these challenges. Containing all the nutrients that a body needs to survive, the potato has enormous potential as a staple crop in regions such as Doko Yoyery as it is particularly adaptable to adverse environmental conditions. On top of this, potatoes use less water per nutritional output than all other major food sources, making them an ideal crop for small farm holders across Africa. With the right seed and land management techniques, the potato has the potential to double or treble current food yields, resulting in improved nutrition for rural families as well as a vital increase in household income. The impact this can have on the wellbeing, survival, and quality of life of Tozene and her family is enormous – something that Vita wanted to turn from a potential into reality.

Potatoes are a ‘gender sensitive’ crop. Typically, it is rural women who provide most of the labour in both small and large-scale potato production, from conservation and seed selection to planting, harvesting, storing, and marketing. Thus, the need to utilise the impact of improved seed varieties and better farm practices is tantamount in empowering women like Tozene and supporting them as they build sustainable livelihoods for the benefit of their businesses and their families. This is where the Vita potato programme comes in. 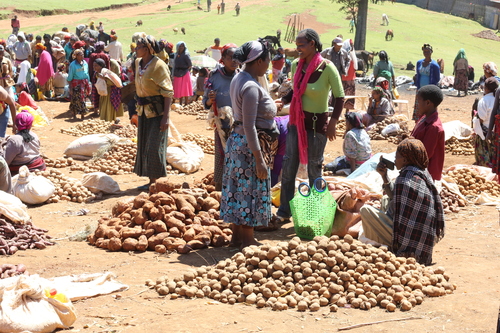 This initiative is a collaboration between Vita, local agricultural agencies, government authorities, farmers’ groups, women’s groups, Teagasc – the Irish agricultural and food development agency – and Irish Aid. The purpose of the potato programme is to train and support isolated and often vulnerable farming families in new land management practices, as well as harnessing scientific crop production to create high-yielding seed potatoes. It places community empowerment and ownership as the starting point to the successful transfer of technologies, along with enhanced collaboration of local government with external development partners. 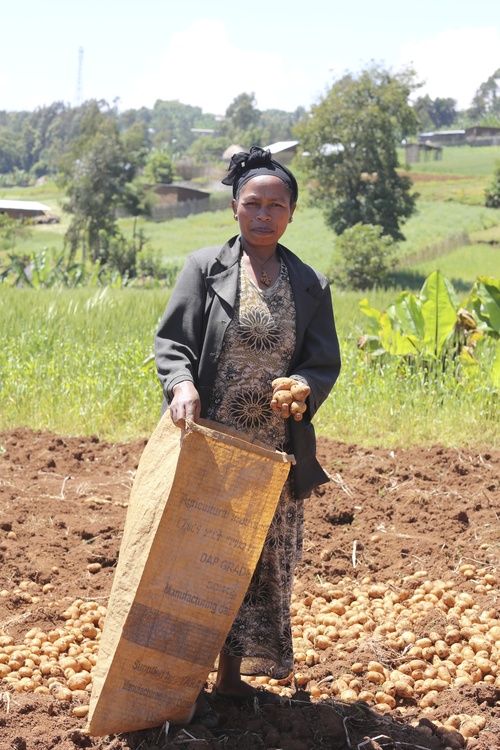 Tozene Nada in her potato field

Tozene joined the programme nine years ago, when she was struggling to compete against other local farmers in the nearby Chencha market.  With the large commercial agricultural traders of Addis Ababa an unfathomable eight or nine hours’ drive away and Tozene’s mountain village,  Doko Yoyery, in a remote and inaccessible part of the Gama Gofa Zone, Tozene had no access to markets that could provide her family with a stable income and was left to compete in a smaller and over-saturated local market.

“All the local farmers were harvesting potatoes at the same time as me,” says Tozene,  “and this meant that prices were at their lowest when I brought my produce to market. I needed to find a way to grow more potatoes and store them for longer, until prices rose again.”

Tozene welcomed the innovative training and support that she got from Vita, both on the best ways to grow potatoes and how to best store them and sell them. Tozene’s access to new seed, better planting techniques, use of fertiliser, and pest and disease management in a country where less than 3% of Ethiopian farmers currently have access to improved or uncontaminated seed, has rewarded her innate tenacity, dedication and hard work with a stable income and introduction to larger markets. The programme, and Tozene’s own inspirational initiative, has transformed her family’s life, allowing them to buy a cow, three oxen, and even a television for her delighted children! Her husband was even able to give up his weaving job in Addis Ababa rejoined her on the farm, looking after the oxen and the cow.

More than this, Tozene has used the financial stability the programme gave her to improve the livelihoods of others in her community. She and her fellow farmers have formed a co-op which gives them vastly improved negotiating power when buying seed, fertilizers and pesticides, as well as access to high-yielding seed. As a bulk producer, the co-op now has access to larger markets in Addis Ababa, and Vita’s agronomists have helped them improve the quality of their seed potatoes to meet the standards required for these new markets. They have also built a community potato store for supplying the markets, and many farmers like Tozene now have personal small stores on their farms. This means that she can supply quality potatoes to the co-op to sell on her behalf, keep seed potatoes in her store to plant the following season, and store some potatoes for her own stove over the following months.

How our Programme Works

The programme works on a seed loan basis, with some profits invested back into the co-op. Tozene turned the initial loan of 500 kg of seed potatoes into six tonnes of potatoes, whereas previously, she might have expected a yield of about three tonnes.  She then paid back the initial seed potato loan and the following year Tozene planted double the amount of seed potatoes. This process has not been without its learning curves. Last year, yields took a dip when Tozene discovered that she had bacterial wilt on her land. However, with help from her co-op, alongside advice and support from Vita and Teagasc agronomists, Tozene was able to rotate her crops while resting part of her land. She can plant potatoes again with new uncontaminated seeds in land that has been cleared of disease.

These inevitable setbacks are vital reminders that farmers need the expertise, knowledge, and training to help them withstand unexpected stresses like bacterial wilt and other plant diseases. 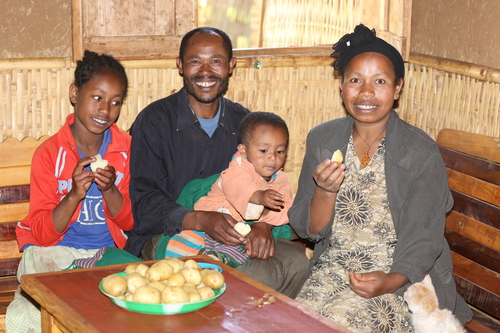 The Vita-led potato coalition is made up of many players from the international agri – food sector, and research is critical to its success. The Ethiopian and Irish research agencies, EIAR and Teagasc have teamed up with Wageningen University in The Netherlands to drive the research forward. Other members of the coalition include local government agencies, farmers groups, internal and Irish Potato Federations and other NGOs including Concern Universal, Gorta SHA and the Australian NGO AFAP. This broad coalition brings together all the necessary expertise and networks required to roll out the potato programmes across Africa in the medium term, but crucially, it provides a template of agricultural development that can be implemented in many other communities worldwide.

The Power of the Potato

The long-lasting and far-reaching impact of this innovative and scalable programme is embodied in Tozene’s story and the happy security her reunited family now live in. In her own words, Vita’s improved potato programme, “has helped me to reunite my family and send my children to school,” she says. As for her children? “They are happy,” laughs Tozene, “because I have just invested in a television!”